Legendary filmmaker Ken Burns’ “Country Music” on PBS has captivated viewers across North America, and now you can explore the themes and stories in the 16-hour series on a one-time, “Tauck Nashville Country Music Event”.

The event from September 9 – 13, 2020 is designed and offered in cooperation with Burns and his longtime collaborator Dayton Duncan.
The 'Tauck Nashville Country Music Event' is part of Tauck's longstanding Ken Burns American Journeys partnership with Ken Burns and Dayton Duncan. The partnership includes multi-day events that focus on themes explored in a single Burns film (such as the country music event),
Duncan is the writer of 'Country Music' and its companion book, and he co-produced the film along with Burns. He will be on hand in Nashville to deliver a keynote address on the gathering's first evening, and to meet and mingle with Tauck guests throughout the five-day event.
Other Tauck-exclusive experiences will include:
·     an after-hours evening with dinner and performances at the Country Music Hall of Fame,
·     a live studio recording session with an up-and-coming artist, and
·     a private performance and talk by Chelsea Crowell, who will describe growing up in a family of country music greats. Crowell is the daughter of singer-songwriter Rosanne Cash and Grammy Award-winning performer Rodney Crowell, and the granddaughter of country music legend Johnny Cash. 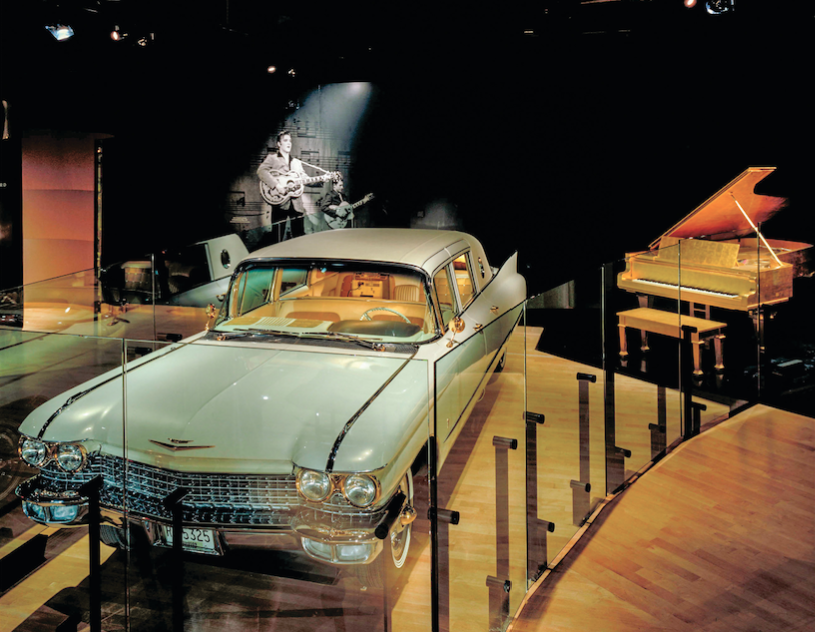 (Elvis Presley exhibit at the Country Music Hall of Fame)
﻿
Other experiences include
·     a private tour of RCA Studio B (where artists from Elvis Presley and Chet Atkins to Dolly Parton and Willie Nelson have recorded),
·     dinner at the Grand Ole Opry (where guests will attend a live radio show performance), and
·     lunch at the legendary Blue Bird Café featuring private performances by Nashville Songwriters Hall of Fame members, and
·     a visit a museum displaying iconic guitars and have lunch at Merchants, a former hotel whose guestbook featured country music luminaries including Dolly Parton, Hank Williams, Patsy Cline and Roy Acuff
·     dinner and a panel discussion with country music stars led by Dayton Duncan (plus a performance by Asleep at the Wheel) at City Winery, and
·     a Nashville walking tour that visits the legendary performance venue Ryman Auditorium, the Patsy Cline Museum, and the George Jones Museum, where guests will enjoy a performance by singer and producer John McEuen, a founding member of the Nitty Gritty Dirt Band.
The event concludes with a special gala evening including performances, a reception and dinner at the Country Music Hall of Fame.
Included in the event price (from $5,990 USD/$7,780 CAD per person, double occupancy, plus airfare) are four nights accommodations at the Hilton Nashville Downtown, all meals, all gratuities, admission to all performances and attractions, airport transfers, and much more.

CONTACT US TODAY TO BOOK THIS ONE-OF-A-KIND, COUNTRY MUSIC EXPERIENCE IN LEGENDARY NASHVILLE!

About Ken Burns American Journeys: The 'Tauck Nashville Country Music Event' is part of Tauck's longstanding partnership with Ken Burns and Dayton Duncan. The partnership includes multi-day events that focus on themes explored in a single Burns film (such as the country music event), while other events (including past events in New York City and Chicago) explore themes that intersect with a number of Burns films. The Chicago event, for example, explored elements of Burns's films on jazz, Prohibition and the architect Frank Lloyd Wright.
Burns and Duncan, along with filmmakers and Burns collaborators Lynn Novick and Sarah Botstein, have also shared their own unique insights and perspectives in over 150 filmed vignettes, or mini-documentaries, that guests view during various Tauck tours. For example, guests traveling with Tauck to Yosemite National Park view a vignette highlighting the pioneering role of naturalist John Muir in the creation of the U.S. National Park Service.
About Country Music: The eight-part, 16-hour film is directed by Ken Burns, written by Dayton Duncan, and produced by Duncan, Burns and Julie Dunfey. As described by PBS, the film 'is an exploration of country music – from its roots in ballads, hymns and the blues to its mainstream popularity – and highlights the unforgettable characters and storytellers who made it 'America's music.'' Drawing from more than 100 interviews, some 700 hours of archival clips, and 100,000 still photos, Country Music premiered in September, 2019.

Terms, conditions and restrictions apply; pricing, availability, and other details subject to change and/ or apply to US or Canadian residents. Please confirm details and booking information with your travel advisor.

Bubble Cruising? Yes, You Can Cruise Close to Home

COVID's impact on travel is having one brilliant effect: it's shining a spotlight on the boom in cruising on the wate... learn more

If you close your eyes and picture 'Italy', chances are, it's the rows of vineyards and cypress trees, villas and far... learn more

Sign up for our newsletter to learn about the latest product news and deals. Also receive exclusive offers, contest details and giveaways.